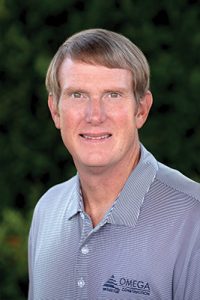 Jeff joins Omega Construction with more than twenty- five years of construction experience in both residential and commercial construction. He is a Raleigh, North Carolina native and spent much of his childhood around the grading and paving industry, which led him to follow his father into civil engineering. He is a North Carolina State University graduate as well as the University of North Carolina at Chapel Hill (but will always pull against the Tarheels).  Jeff married his high school sweetheart, Allison. They have a daughter, Morgan, in high school and a son, Garrett, in elementary school. In addition to being an unpaid kid hauler-arounder, Jeff enjoys time on the lake, running, and serving on several local boards in Raleigh.   Jeff believes that a successful team utilizes communication, collaboration, and respect to accomplish mutual goals. He is happy to be part of the Omega team.