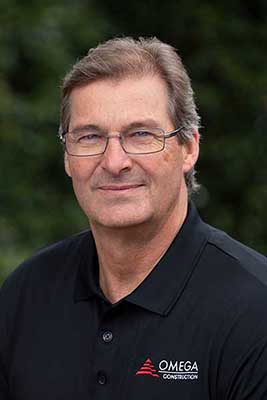 Barry Hennings joined Omega Construction, Inc. in March 2012 and was named its President in August 2012. Under Barry’s leadership, Omega Construction has grown into one of the top private General Contractors in North Carolina focusing on the Industrial, Hospitality, Retail, Commercial and Design/Build markets. Barry has bottom line responsibility and accountability for the Corporation which includes dozens of projects in multiple southeastern states. Prior to joining Omega, Barry worked for John S. Clark, LLC in Mt. Airy, NC as President/CEO since January 2010. Prior to 2010, he was Executive Vice President of the Mt. Airy office of John S. Clark for 10 years, Vice President, Operations for 4 years and Project Manager for 12 years.

In addition to his extensive experience in industrial, warehouse, distribution and retail projects, Barry is responsible for assembling the current staff that has been an instrumental part of Omega’s success. In addition, Barry is responsible for the corporate management policies and procedures including the selection, implementation and training for the project management and estimating software programs in use by Omega. Barry brings the best practices learned over the past 36 years of construction experience to Omega Construction along with a loyal and dedicated staff.